Borrowing its title from a Sonic Youth record, this program investigates, substantiates and considers the use—material or conceptual—of canonical avant-garde film/video works in contemporary moving image practitioners. More a series of questions, provocations and approaches than a clean dictum, Kill Your Idols runs the risk of inside baseball while engaging the pedagogy of critical cinema. When we use words like avant-garde and experimental, we engage in art-making as something martial, progressive and, potentially, as a research-based field of knowledge. These works take literally the notion that a past is something that can be built upon, built again.

How does the use of one's favorite Brakhage film as "found" footage change and charge the politics and poetics of appropriation? What are the limits of re-enaction? How does the acknowledgement of a canon within an avant-garde practice impact new makers? What can be gleaned from a practice that combs the canon? What can new technologies tell us about old ones? What is lost and what is gained? What of those artists appropriating and updating their own works?

Through re-enaction, re-mixing and re-considering, the weight of influence is all over these works. There are great triumphs and minor failures, snark attacks and exegeses on the space between veneration and enervation.

Eric Fleischauer - Rhythmus 21st Century (Straight) | 3 minutes | 2011 | Video
“Rhythmus 21st Century is a remake of Hans Richter’s seminal film from 1921 Rhythmus 21. Comprised of four versions (Straight, Gradient, Color/Film, Color/Gradient), each video was (re)made with fame–accurate precision using sophisticated animation software. Instead of the clarity and directness of citation, Rhythmus 21st Century draws attention to the unreliability of the archive where even the exact trace of an original can accrue meaning and be transformed through newly created associations.” -EF

Theo Darst - MOTHLIGHT 3D v.2 | 1 minute | 2011 | Video
“A frame by frame 3D rendering of a truncated version of Stan Brakhage's 1963 film Mothlight uploaded to youtube by user sarahlvidner. MOTHLIGHT 3D is an attempt to recreate the materiality of Brakhage's piece that is lost through digital compression with new, cameraless technologies.” -TD

Ben Russell - Rock Me Amadeus by Falco via Kardinal by Otto Muehl | 4 minutes | 2009 | Video
“A closely hewn remake of the first half of Viennese Actionist (and convicted sex offender) Otto Muehl's 1967 film Kardinal with the following minor substitutions: the original woman is played by the artist, the original artist is played by a woman wearing a powdered wig, and the film is presented as a Karaoke sing-a-long to a tune by one of Otto Muehl's more effete 80's popstar countrymen.” -BR

Leigh Brodie - Leigh Brodie Re-performs Paul and Marlene Kos' Lightning | 1 minute | 2010 | Video
“In early video works, especially Paul and Marlene Kos's Lightning, the sense of magic the technology holds is intriguing. Can video capture the supernatural or is there some trick or treachery involved? In the Re-Performance of the video I introduce another mainstay of the medium: the blooper.” -LB

Pete McPartlan - Origami Seizure Comparison | 2 minutes | 2009 | Video
"I made this work after a visit to the, now closed, Experimental TV Center in NY which felt like a pilgrimage of sorts. The title of the video is a riff on Paul Sharits' Epilepsy Seizure Comparison but it's his Shutter/Interface that most strongly resonated with me. I made it in a really off the cuff way, with the leftovers that I had prepared for ETC - scans of origami crease patterns. Looking at it now, it's interesting to me that I probably won't be able to see Shutter/Interface, in the way it was intended, for another 10 years or more and the only way I can learn about the experience of watching it is through my flawed memory or trying to recreate it." -PM

Roger Beebe - TB TX Dance | 3 minutes | 2006 | 16mm on Video
“Cameraless film made by running clear 16mm leader directly through a laser printer. The dots were inspired by the stockings Toni Basil (‘Antonia Christina Basilotta’) wore in Bruce Conner’s Breakaway in 1966, which also serves as the source footage for the dancer in the film. Toni Basil herself is a source of inspiration for all 30-somethings who haven't yet made enough of their lives. (She was 39 when "Mickey" was a hit in 1982.)” -RB

Rick Silva - Phil Morton "Colorful Colorado Remix (Rick Silva's 2011 Remix (Kill Your Idols Version))" | 9 minutes | 2012 | Video
"When I remix a work these days, it's a bit of an excuse to spend a long time with that piece. Most of my work these days is about remix, glitch, and landscape, so Morton's work really spoke to me. I had an extra connection with this Morton piece because I spent most of my life in Colorado." -RS

Evan Meaney - Ceibas: Epilogue: The Well of Representation | 7 minutes | 2011 | Hacked ROM/Video
"In part a remake of Hollis Frampton’s Gloria! (1979), in part a repurposing of hacked, 16-bit video game technology; The Well of Representation asks us to reconsider our fear of the liminal. Following the convergent narratives of several voices, ranging from the linearly historical to the cybernetically personal, we come to understand the journey ahead: searching from interface to interface, knowing that whatever home we find will be a collaborative compromise. One where we might live beyond our representations and finally come to say what we mean." –EM

Greymalkin Center for Experimental Living, Portland, OR
with Why I Must Be Careful
May 21, 2012 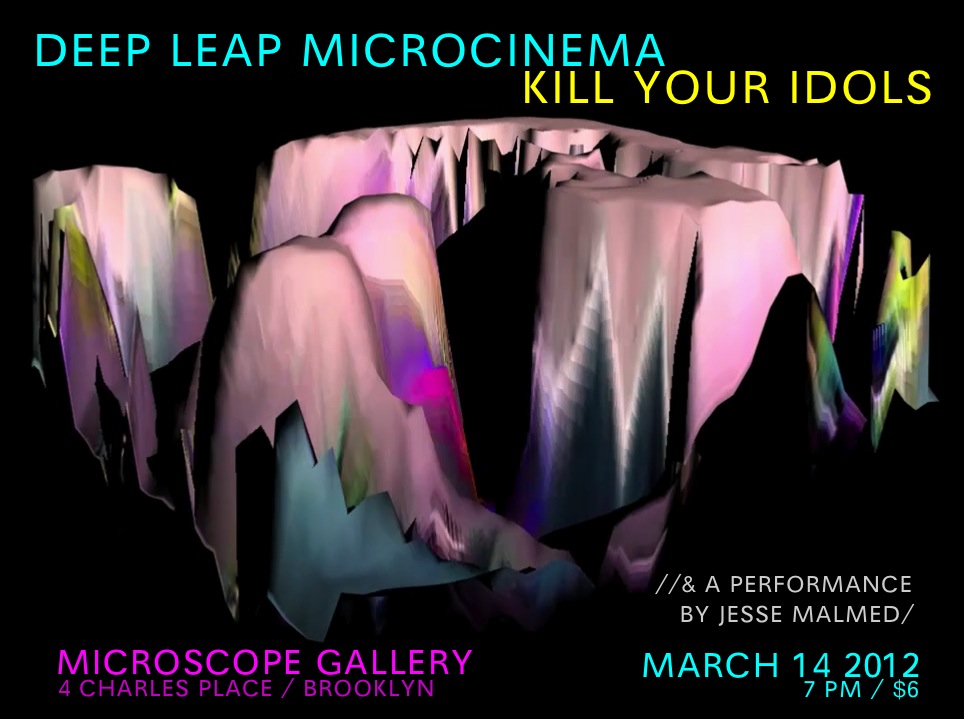 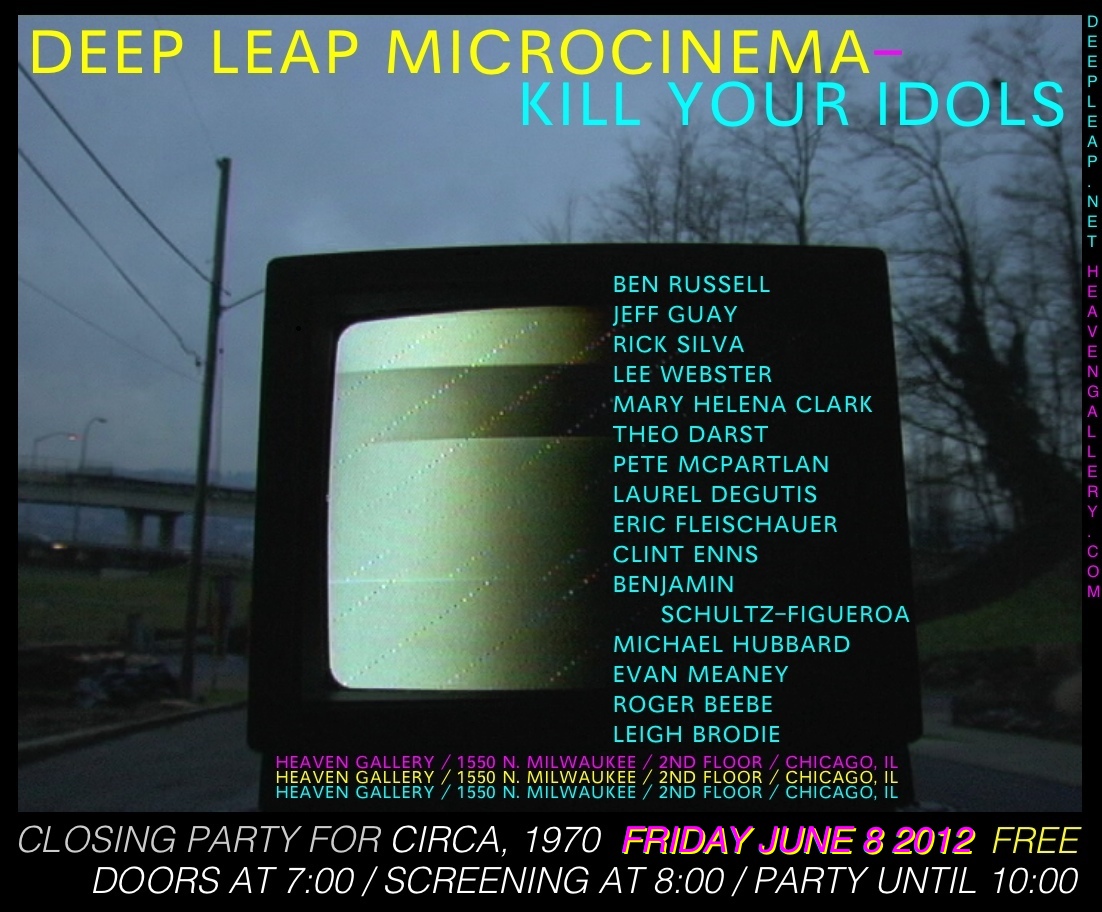